The company’s ASRs have assisted in the arrest of suspects involved in crimes ranging from armed robbery to hit-and-runs. Their machine-embedded thermal scanning capability even aided in preventing the breakout of a major fire. You can learn more about the crime fighting wins at www.knightscope.com/crime

The company has achieved several milestones since its creation in 2013, including:

With backing from more than 28,000 investors and four major corporations and over $100 million raised since inception, Knightscope is poised to be an industry leader in the future of public safety and security.

On December 1, 2021, Knightscope announced the commencement of an offering of up to $40 million of its Class A common stock, with shares to be listed immediately following closing on the Nasdaq Global Market under the ticker symbol ‘KSCP’. The offering is for up to 4 million shares priced at $10 per share. Learn more at www.knightscope.com/investors

Knightscope’s long-term vision has an eye on the greater good. The company’s mission is to make the United States of America the safest nation in the world while supporting the 2+ million law enforcement and security professionals across the country.

Crime has an estimated negative economic impact in excess of $2 trillion annually. As crime is reduced, positive impacts will likely be realized across several aspects of society, including housing, financial markets, insurance, municipal budgets, local business and safety in general.

Knightscope CEO William Santana Li was interviewed by Kevin O’Leary, more commonly known as Shark Tank’s Mr. Wonderful. When asked to explain how the benefits provided by the ASRs outrank a human doing the same job, Li said, “First, just the simple presence of a physical deterrent causes criminal behavior to change. Second, the machines are self-driving cars that patrol all around and recharge themselves. They also generate 90 terabytes of data per year. No human would ever be able to process that. The robots are intended to be eyes and ears for the humans, not a one-to-one replacement.”

The Knightscope solution to reduce crime combines the physical presence of ASRs, sometimes referred to as proprietary Autonomous Data Machines, with real-time onsite data collection and analysis. The ASRs are fitted with eye-level 360° cameras, thermal scanning, public address announcements and various other features that work in tandem with humans to provide law enforcement officers and security guards unprecedented situational awareness. 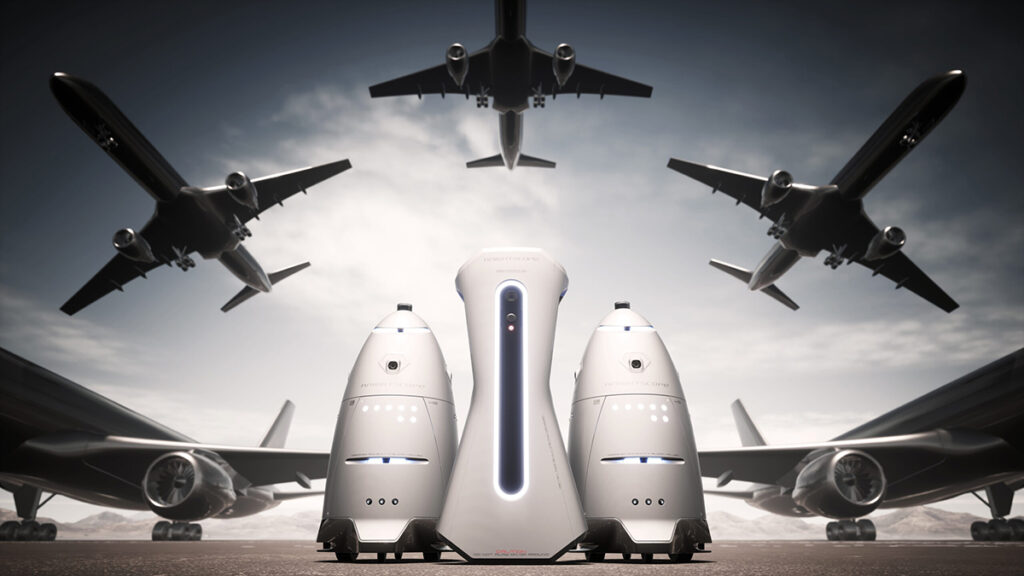 Those 90 terabytes of data are then formatted in a useable way, so law enforcement can leverage that information and execute their responsibilities more effectively.

The company’s recurring revenue business model is set up to mimic the recurring societal problem of crime, and it takes into consideration the fact that innovation in the security and public safety industry has been stagnant for decades. Because the traditional practices of the sector have remained unchanged for years, automation has potential to drive substantial cost savings – and significant improvement in capabilities.

Human security guards are one of both the largest expenses and the largest liabilities for companies. Knightscope’s robots are offered at an effective price of $3 to $9 per hour, compared with approximately $85 for an armed off-duty law enforcement officer and $15 to $35 for an unarmed security guard.

This innovation has the potential to drive considerable cost savings. Based on these estimates, manufacturing costs can be recovered as soon as the first year of operation.

The company has nine patents and a framework of unique intellectual property. Knightscope currently offers a K1 stationary machine, a K3 indoor machine and a K5 outdoor machine. A K7 multi-terrain four-wheel version is in development. 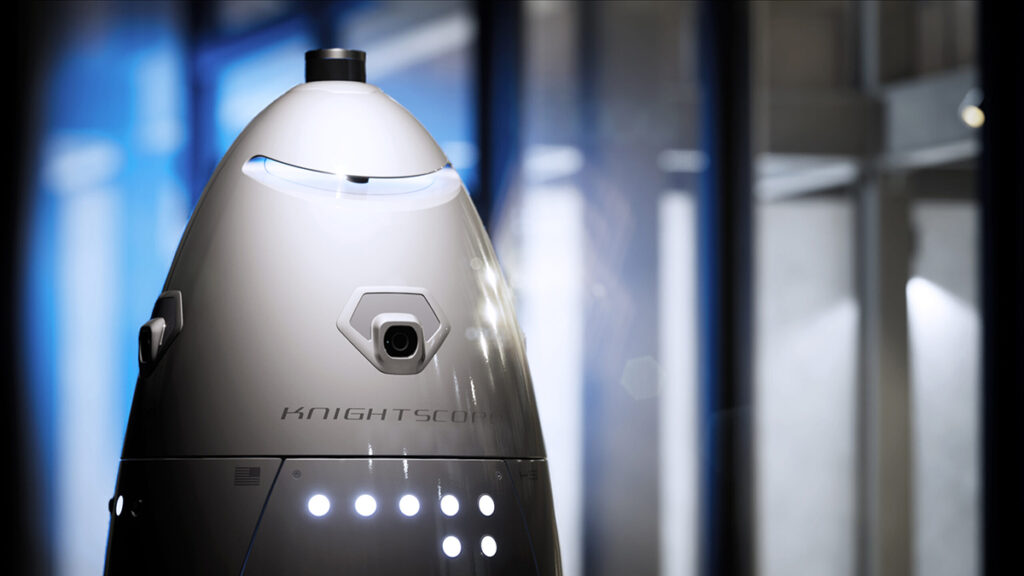 The ASRs and the related technologies were developed ground up by the company and are Made in the USA. 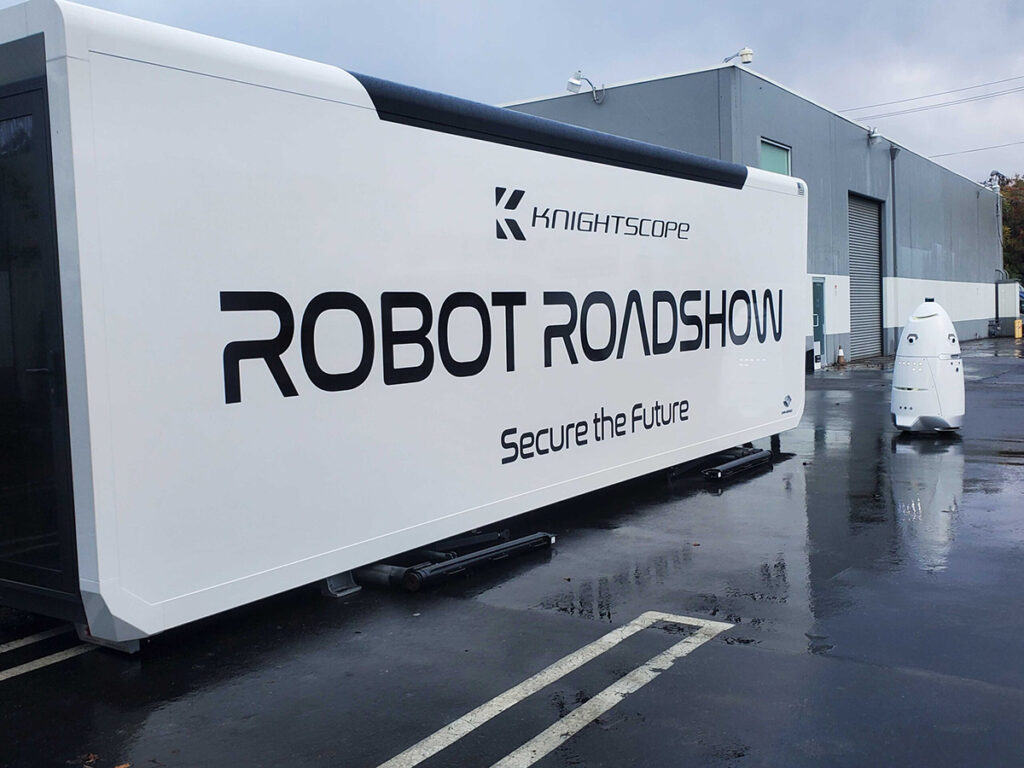 Knightscope has created the ultimate hybrid physical and virtual event, bringing its Autonomous Security Robot technologies to cities across the country for interactive and in-person demonstrations.

Each roadshow landing is hosted virtually by a Knightscope expert, and visitors can interact directly with each of the company’s ASRs and see the Knightscope Security Operations Center (KSOC) user interface in action. Learn more at www.knightscope.com/roadshow

Chief Executive Officer William Santana Li is a veteran entrepreneur, a former executive at Ford Motor Company and the founder of GreenLeaf, a company that grew to be the world’s second-largest automotive recycler and is now part of LKQ Corporation (NASDAQ: LKQ).

Chief Client Officer Stacy Dean Stephens brings his experience as a former Dallas law enforcement officer, as well as his skills as a seasoned entrepreneur, to assist on the client acquisition side.

Chief Design Officer Aaron Lehnhardt brings over two decades of two- and three-dimensional product and industrial design in modeling and VR to the table, on top of his experience as a senior designer at Ford Motor Company.